The two-man team that makes up Total Pixel Games Studio has released a new game for Android. And with tomorrow being Halloween and all, it’s the perfect time to bring it to your attention. Zombie Highway Nightmare is out, and it’s free on Google Play with ads and in-app purchases.

Zombie Highway Nightmare is set in the middle of a zombie apocalypse where players must race across the country to escape the brain-munching bastards they will stop at nothing until their appetite for human flesh is satisfied.

Here’s the rundown. All pun intended.

The game weighs in at 118 megabytes, so make sure you have a Wi-Fi connection handy. You can download and take it for a spin using the Play Store widget below. Being that this is a new title, it really helps if you drop a rating for the developers to help them gain feedback.

I played the game for about an hour, and it’s a pretty fun little time-waster. Hopefully, you’ll agree! There’s just something satisfying about running zombies down and leaving a bloody trail of chaos and destruction, I suppose.

ICYMI: Here’s our round-up of the top 10 Zombie games for Android! 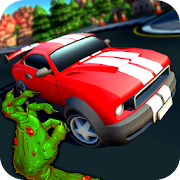 [Available worldwide now!] Into the Dead 2 is trudging onto Android to devour your brains