Welcome to our first “5-minute game review” here on Android Unfiltered. A lot of times, we find ourselves reading game reviews that are a bit overwhelming. Sometimes, you find yourself wishing you’d packed a lunch before you’d started reading. Don’t get me wrong, I love an in-depth review when there’s a need for one. Most of the time, however, I’d rather just get a quick overview along with the highlights (and low-lights) of the game I’m reading about. That got me to thinking… Why not do a series of 5-minutes reviews for our readers? Today, we’re kicking that series off by taking a look at Stickman Skate Battle.

Stickman Skate Battle is a “freemium” game, meaning it’s free to download on the Google Play Store. It does include in-app purchases, ranging from $0.99 to $99.99. It comes to us from Djinnworks, out of Austria. Djinnworks has released more than 25 games and has close to 400 million installs on the Play Store across all of its games. Stickman Skate Battle is one of its newer releases. It’s also well received, according to its respectable 4.8 star rating on Google Play.

Stickman Skate Battle is essentially a PVP battle game, in which players compete against each other to gain the highest score by doing tricks. Think Tony Hawk Pro Skater, but on Android — and without Tony Hawk, or any other playable characters that resemble a human, for that matter. Don’t let the generic characters fool you, though. There’s still tons of fun and potential to waste time here.

After you download and install the game, you have to complete a quick tutorial before you go any further. This gives you an intro to the game’s control scheme and teaches you how to do basic moves, like ollies, kickflips and grinds. In the game, the more tricks you do, the more points you score. You control your skater using two on-screen “joysticks” on the left and right of your screen.

Once you finish the tutorial, try a couple of rounds in training mode. You’ll want to make sure you’re ready to compete with live players. Head on over to the Online Challenge mode when you’re all good. Right now, there’s only a 1v1 head-to-head mode, but it looks like the developer is working on an 8-player tournament mode. The game currently lists tournament mode as “coming soon”.

Inside a game, you either go first while your opponent watches you and then you watch their run from the sidelines when it’s there turn, or vice versa. You get one minute to rack up as many points as you can. Highest score wins.

Starting a multiplayer match costs in-game coins, which you receive automatically every 60 minutes, for free. You can also earn coins by watching ads, rating the game on Google Play, and liking it on Facebook and Twitter. Additionally, you can buy them for real-life money, if that’s your thing.

You can use coins to buy in-game power-ups, new skateboards and tricks, or unlock new skaters. You can also buy different in-game chat displays, like emotions and taunts. The game’s other form of currency is in-game cash, which is a bit harder to obtain without purchasing it with real dollars. Spend in-game cash on extras, like a coin doubler to help you earn more cash, and an extra time buff that gives you 5 extra seconds for each match.

Stickman Skate Battle is a pretty fun game. The graphics are smooth on my LG G6, and the gameplay itself is entertaining enough to keep me hooked. For now, at least. If you’re looking for something new to pass the time, you can’t go wrong here. Give it a spin using the link below.

Scroll past the download link for our final rating.

Disclaimer: You will need an Internet connection to play, due to the multiplayer aspect. 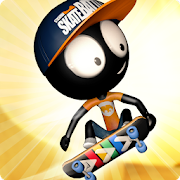 What do you think about our 5-minute Game Review series? Do you think we covered enough ground here? Would you like us to continue with this format, or would you rather see longer, more in-depth reviews on the site? Drop us a line in the comment thread to voice your opinion.

If you’re an Android developer and would like to have your app or game featured on Android Unfiltered, please consider our App Review Service to help you gain more exposure.

Until next time, here’s our final rating!