Yesterday, Razer announced their first smartphone, the Razer Phone. Tagged as “a phone for gamers”, Razer has their target audience aimed at the gaming community. That doesn’t mean this device isn’t good for everyone else though, as the Razer Phone is a power house in the specs department, and should certainly handle anything you throw at it.

A first for Nova Launcher

Here at Android Unfiltered, I felt obligated (and proud!) to highlight the fact that the new Razer Phone is the first ever to come pre-loaded with Nova Launcher Prime. Cliff Wade, a fellow writer here, is also celebrating his two-year mark, working on the Nova Launcher team as their social media manager. Congratulations, Cliff!

Kevin Barry, lead at TeslaCoil, shared a post on Medium about this business decision and his experience with partnering with Razer. One quote stood out for me;

The Razer Phone is the only device on my desk, out of several dozen, running the “stock” launcher, but that’s not the only reason I’ve been enjoying it. It’s great hardware and software. 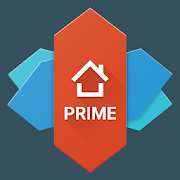 The Razer Phone is a powerhouse

At first glace, you may think this device is a little dated in the looks department. There are large bezels on the top and bottom. Those are there for a reason though. If you’re a real gamer, you’ll want and need something to grip. Those bezels are filled with dual front-facing speakers which many are claiming to be the loudest heard on a smartphone.

The device is also thick. But that happens when you stuff a 4000 mAh battery in there! This should allow users to play their games for many hours before a charge is needed. If a charge is in need, you can use the new Quick Charge 4.0 to get you back into action.

Looking at the phone is said to be stellar with a 5.7″ 120 Hz screen. No other smartphone has a refresh rate this high, and only Apple’s iPad Pro has done this on a tablet. This high refresh rate provides beautiful smooth action on the display and is something you have to see to really understand.

As for speed and performance, the Razer Phone is equipped with the Qualcomm Snapdragon 835, and 8GB RAM. You have 64GB of storage, and can expand that to 2TB via microSD.

For a flagship device with the specs it has, it sounds like a reasonable deal compared to the prices of the Google Pixel 2 (XL), Apple iPhone X, or Samsung’s Galaxy Note 8.