As most of you know, one of the driving factors behind my decision to eat, sleep and bleed #TeamAndroid is customization. Smartphones are anything but cheap these days, so when I invest that kind of coin into something, I want to be able to make it mine from head to toe. Lawnchair Launcher, a newly-released app on Google Play, is an app I highly suggest to anyone with who likes to customize their device.

Lawnchair, from deletescape, is a homescreen replacement app for Android smartphones and tablets that aims to bring Pixel-style features to those who don’t have “Pure Google” devices. Created by a team of volunteers, Lawnchair has been in development for some time now but launched on Google Play just yesterday.

There are a few things worth mentioning before pointing you towards the download link. First and foremost, Lawnchair might not work perfectly on Android 8.0 Oreo devices. It also doesn’t have any of the new Pixel 2 Launcher features, like the search bar on the bottom. (If you’re looking for those, you may want to try Rootless Pixel 2 Launcher.)

Lawnchair does feature Google Now support. However, you’ll need the Lawnfeed companion app to enable it.

In a field totally dominated by the likes of major launcher apps, like Nova Launcher and Action Launcher, it’s nice to see a new title making some waves on the scene. If you’d like to join in on the action, hit up the Play Store widget below. Lawnchair is available for free and comes with a guarantee from its developers that it will always remain free and open source.

Congrats to deletscape for making it onto Google Play. I look forward to seeing Lawnchair grow and evolve. With a solid launch like this, I’m sure this is just the beginning. 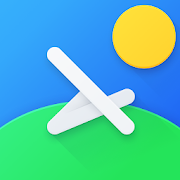