We’re back again with the second installment of our ‘5-Minute Game Review’ series, and this time we’re taking a look at Faraway: Puzzle Escape, from Snapbreak.

@GooglePlay suggested we review this game, and you don’t just ignore advice from Google Play when they offer it. That said, I couldn’t wait to get home and give it a spin, and now I’m having a hard time putting it down.

Faraway: Puzzle Escape’s name explains the game’s concept quite literally. You start in a temple where you have to solve puzzles to advance through the level, and then to finally escape.

To solve puzzles and move on, you’ll need to collect items, manipulate objects and pay close attention to your surroundings. There’s clues all around to help you escape, but they’re not always obvious. Sometimes, they’re right in front of your face, and at first, you don’t even notice them.

The game’s tap-to-move system makes it easy to navigate through its immersive 3D world. You also tap to collect items and manipulate objects in your environment.

Each item or object you come across plays an instrumental role in your escape, as they’re all a piece of the overall puzzle. Along the way, you must also collect notes from the diary of your missing “father” to find out what happened to your in-game family.

Faraway’s most notable feature is its splendid graphics. The visuals are bright, colorful and bold, and gameplay is smooth and user-friendly. Controls are easy to pick up on, too, since it’s literally all taps. The one downfall I encountered was sometimes not knowing where to tap, but that’s somewhat expected from a puzzle game.

It’s also worth noting that Faraway is compatible with 18:9 screen displays, as well as the traditional 16:9 aspect ratio. This means the game fills the entire screen on phones with the larger display ratio, like the LG G6. The difference is subtle, but it’s definitely more appealing.

Faraway: Puzzle Escape is free-to-play for the first 9 levels of the game. After that, it’ll cost you $2.99 to unlock the additional 9 levels. This is one area where I’ve gotta knock the game, since I can’t find anything else to rag on.

A quick look at the comments section shows most users feel the same way I do about only half of the levels being free. In fairness, it’s only three bucks, should you decide you want to go further in the game. Aside from that, everyone else seems to agree, this game is pretty awesome. It currently has a 4.6-star rating on Google Play.

Check it out via the download link below, then stop back and let us know if our final rating lines up with yours! 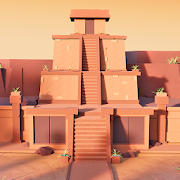