It’s been a bit since we’ve reviewed a game on Android Unfiltered, so today’s the day. I’ve been playing Big Bang Racing for the past few hours, and now I’m here to share my thoughts about this fun, physics-based racing game that just found a new permanent home on all my Android devices.

Have a look at the teaser video below, and then I’ll tell you all about it.

Big Bang starts you out with 6 tutorial levels to get you comfortable with the controls and into the swing of things. The game’s control scheme is simple enough – you move forward and backward with two buttons on the right, and you spin your vehicle using two buttons on the left of your screen.

You have to navigate your way through side-to-side levels, with jumps, flips, and loop-de-loops. The game reminds me a lot of Sonic the Hedgehog, with its 360-degree ramps that make you drive completely upside down to get through.

There are 3 map pieces in each level that you must collect in order to advance to the next level. Each star you collect along the way gives you a better overall score, but you only need just one to move on. Think Angry Birds.

Once you complete the tutorial levels, that’s where the real fun begins. You can choose to continue down the single-player path, or jump right into the online competition mode and go head-to-head with players from around the world. Online races consist of four players racing against each other, with the first to cross the finish line being the winner.

One of my favorite things about this game is the online and multiplayer aspects. You can create tracks, and not only share them online but receive votes from other players on whether or not they like your creations. This is a really fun way to keep players involved and keep the maps fresh at the same time.

Big Bang Racing is the first and only title from Traplight on Google Play at the time of this review. Certainly don’t let the company’s newcomer status fool you, however. Big Bang has over a million installs and is generally well-received, by looking at its Play Store reviews. It has a respectable 4.6 rating, with over 54,000 reviews posted.

It’s available for free on Google Play, with in-app purchase and ads. You can grab it up and give it a try with the Play Store widget below, then scroll down for my final rating. 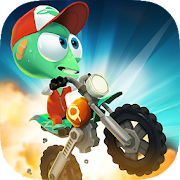