Adventure Communist, the follow-up sequel to Kongregate‘s Adventure Capitalist, is out for Android. I played the first title in this series quite a bit a while back. As such, I’m happy to see this second installment – although it doesn’t look like there’s much new here, outside of the game having a Communist theme to it.

For those unfamiliar, Adventure Communist and its predecessor are tap-to-play simulation games in which players purchase assets that generate cash. The further you get in the game and the more assets you buy, the more money you make. It’s an endless game with no real purpose, but it’s a fun little time-waster just the same.

Become glorious leader of your own Communist State, and gather resources to build ultimate super power. Dig potatoes, research experimental upgrades, and make efficient all the means of production to raise to highest ranks.

Are you seeing a few red flags? That is good thing! AdVenture Communist features State Approved Communist jokings! Because jokes about Communism aren’t funny unless everyone gets them.

And when you are getting of the tired, take break! Communist State keeps producing while you’re gone. Though we will miss you terribly!

There are medals to earn! Tasks to delegate! Strangely addictive progress bars to watch go zippy zappy. It’s everything you’ve ever wanted in a Communism Simulator!

Adventure Communist weighs in at just over 56 MB and is free to play with ads and in-app purchases. It also requires a network connection and a Google Play Games account to save your progress to the cloud.

If you’re ready to kiss your boredom goodbye and make a few billion imaginary dollars, head over to the Play Store using the link below. 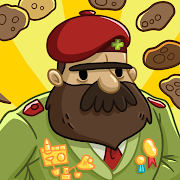