There was a time when many people didn’t know anything at all about customization. And then came Action Launcher. It showed people the true meaning of customization by offering options a-plenty.

While it was launched in 2012, it was only 2014 when it switched to in-app purchases and since then, it hasn’t been on any kind of sale. But that changes today – for a limited time.

Action Launcher requires a one-time plus upgrade to unlock all the features. It was originally $4.99, but today on the occasion of its birthday, it’s 30% off! Note that the sale lasts only for 3 days, so be quick to buy it.

Also, the developer Chris Lacy has released the version 32 with some bug fixes and improvements. It unlocks some additional features for users of the free version. The changelog is as below:

Adaptive Pack for Action Launcher also saw an update today which bumped up the version to 3.0, containing 200 new icons. With support for over 3,400 apps, the Adaptive Pack comes at a price of $4.99.

Let us know how you feel about the new version and especially the sale in the comments below! 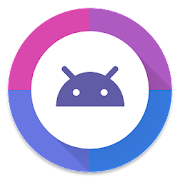 Ruggon Icon Pack: Grungy, torn, and dirty. And we LOVE IT!

Nova Launcher 5.5-beta-3 out now with lots of Pixel 2 and Oreo goodness

GP101: How to make awesome home movies with Google Photos